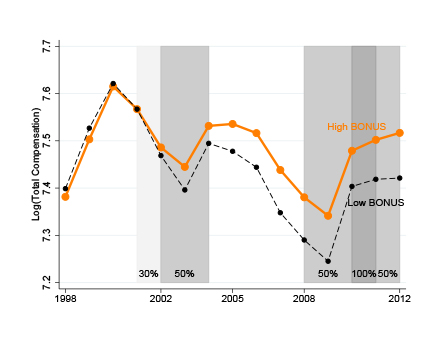 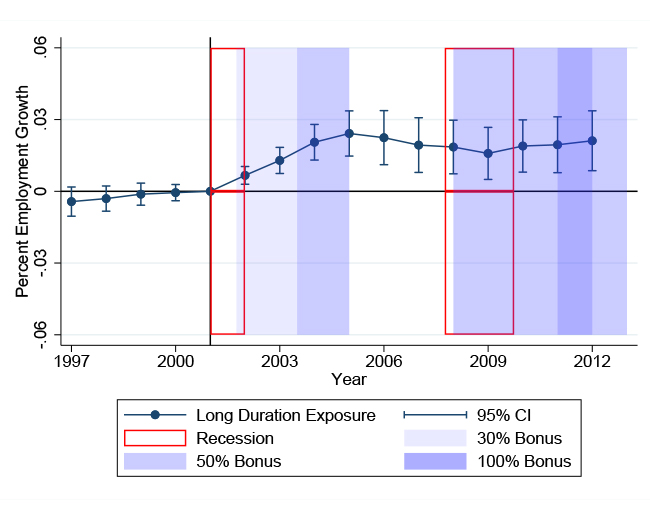 Since 2002, the US government has encouraged business investment using accelerated depreciation policies that significantly reduce investment costs. We provide the first in-depth analysis of this stimulus on employment and earnings. Our local labor markets approach exploits cross-industry variation in policy generosity interacted with county-level industry location data. This strategy identifies the partial equilibrium effects of accelerated depreciation. Places that experience larger decreases in investment costs see an increase in employment and earnings. In contrast, the policy does not have positive effects on earnings-per-worker. Overall, our findings suggest federal corporate tax policy has large effects on local labor markets.

The Effect of Corporate Taxation on Investment and Financial Policy: Evidence from the DPAD 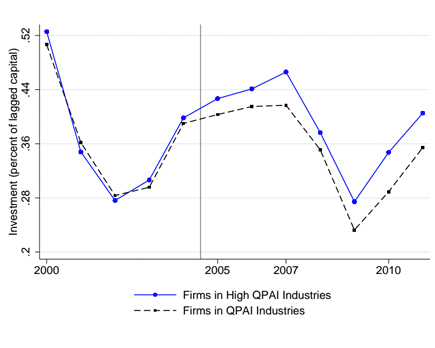 This study estimates the investment, financing, and payout responses to variation in a firm’s effective corporate income tax rate in the U.S. I exploit quasi-experimental variation created by the Domestic Production Activities Deduction, a corporate tax expenditure created in 2005. A one percentage point reduction in tax rates increases investment by 4.7 percent of installed capital, increases payouts by 0.3 percent of sales, and decreases debt by 5.3 percent of total assets. These estimates suggest that lower corporate tax rates and faster accelerated depreciation each stimulate a similar increase in investment, per dollar in lost revenue. 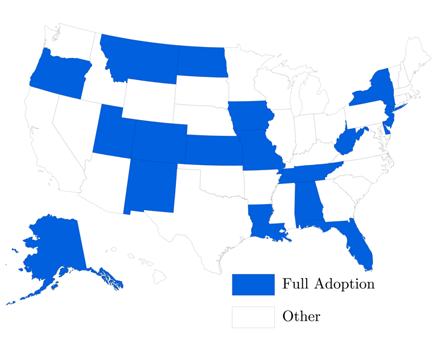 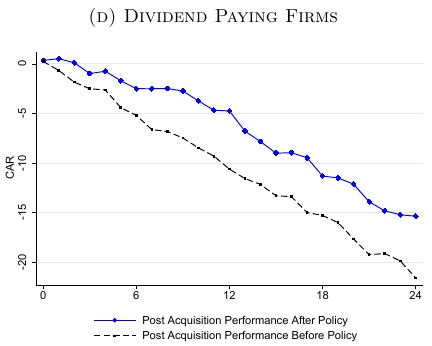 When capital gains are taxed at a lower rate than dividends, the difference in rates creates a tax discount on mergers and acquisitions. The intuition is that if a target firm's assets are subject to the higher dividend tax rate, but the proceeds from the sale of these assets are taxed at the lower capital gains rate, there is a tax preference to be acquired. Using quasi-experimental variation created by the Jobs Growth and Tax Relief Reconciliation Act of 2003, we show that this tax discount increases the quantity and decreases the quality of acquisitions made by dividend-paying firms with taxable shareholders. Our estimates suggest that re-implementing the same wedge between dividend and capital gains rates that the 2003 reform eliminated would destroy approximately $59 billion of the value of mergers and acquisitions in the U.S. annually. 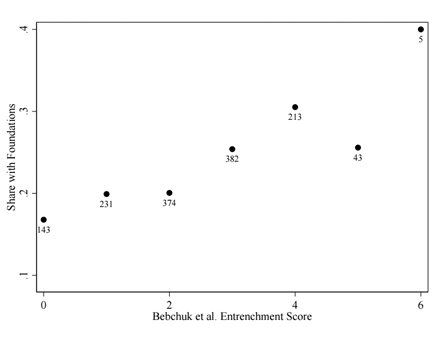 We show that firms with corporate charitable foundations increased shareholder distributions by less than one half as much as similar firms without foundations following the 2003 capital income tax cut, even after controlling for common explanatory factors such as executive shareholding. The findings are robust to alternative explanations and to common threats to causal identification. Further exploration reveals that our estimates capture a greater reluctance of foundation firms to initiate or rapidly increase shareholder payouts, but not a greater tendency to reduce or eliminate shareholder payouts. Additional analyses suggest managers direct funds that would have been paid out toward executive compensation and capital investment. In light of the fact that firms with foundations are more likely to exhibit a high degree of managerial entrenchment, we interpret these findings as evidence that foundations are both a sign of and vehicle for managerial self-dealing.

Taxes and the Location of U.S. Business Activity Abroad (with Jack Mutti) 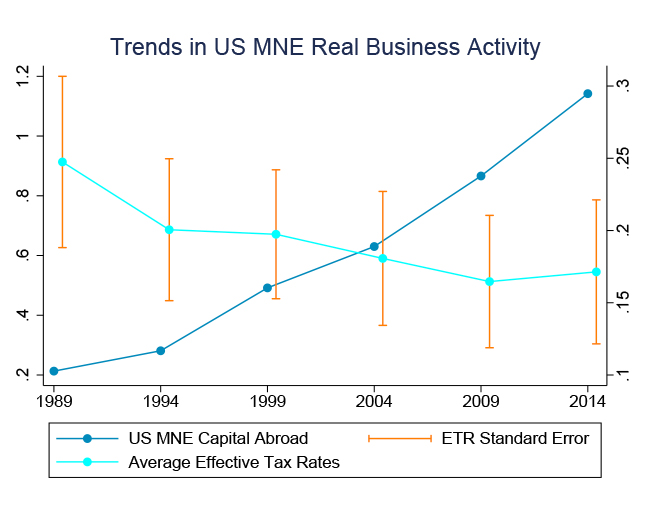 In 1991, Harry Grubert and Jack Mutti published a seminal paper in the field of international taxation. Using cross-sectional data from 1982, Grubert and Mutti (1991) showed that U.S. multinational real business activity was concentrated in countries with low effective tax rates, suggesting taxation plays a first order role in determining not only the location of international profits, but also in determining the location of U.S. business activity abroad. We use data on the activities of U.S. Multinational Enterprises (MNEs) from 1989 to 2014 and a panel fixed effects framework to extend and update results from the seminal 1991 paper. We focus on three findings. First, although our constant elasticity estimates. with values near unity, are smaller than most other papers in the literature, we continue to find that effective tax rates influence the business location decisions of U.S. MNEs. Second, our estimates demonstrate remarkable stability over the sample period, across the various measures of MNE real business activity, and across various effective tax rate specifications. Finally, we address an early critique of the international tax literature -- that effective tax rates are endogenous to business activity measures -- by using changes in statutory tax rates and bases to instrument for changes in effective rates. Consistent with the critique, our IV estimates are larger than baseline elasticities, especially for current year investment and R\&D. 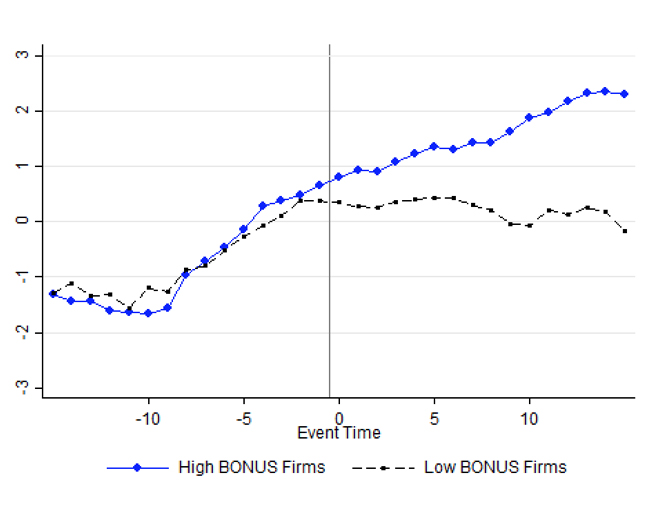 As 2012 drew to a close, the U.S. economy was speeding towards the "fiscal cliff," a series of previously enacted laws that would come into effect on January 1 2013, simultaneously increasing taxes while decreasing spending. At the last possible moment, the U.S. Congress averted the crisis by passing the American Taxpayer Relief Act of 2012. In a surprise move, the act extended bonus depreciation, an investment tax incentive that decreases the present value cost of new capital investments. Using a differential effects event study methodology that relies on this surprise extension and industry variation in the generosity of policy, I estimate how much investors value bonus depreciation and tax investment incentives, more generally. Empirical results suggest stock prices increase by 0.5% for firms that benefit most from the extension of the policy. The results are not concentrated among the types of firms that have been shown to be the most responsive to bonus, suggesting investors value the cash flow effects of the policy but not the investment it stimulates. 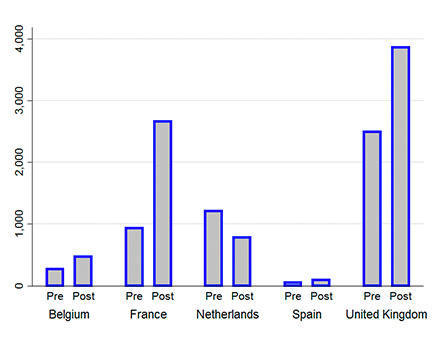 While all Intellectual Property (IP) Box regimes provide substantially reduced rates of corporate tax for income derived from IP, boxes can differ significantly in how they define qualifying IP income. Some boxes apply to income derived from IP that existed prior to the box and to IP acquired after the box was implemented, others only to new IP. Additionally, several IP box regimes apply to IP revenue as opposed to IP income (revenue minus costs). This paper tests how U.S. payments to foreign countries for the use of IP and research and development activities of foreign affiliates of U.S. multinational enterprises (MNEs) respond to the implementation of IP Box regimes and IP Box characteristics. The results indicate that U.S payments for the use of IP only increase in response to boxes that apply to income derived from existing or acquired IP. On the other hand, only boxes that either (1) only apply to newly developed R&D or (2) boxes that apply to IP revenue – as opposed to IP income – stimulate U.S. MNE affiliate R&D.